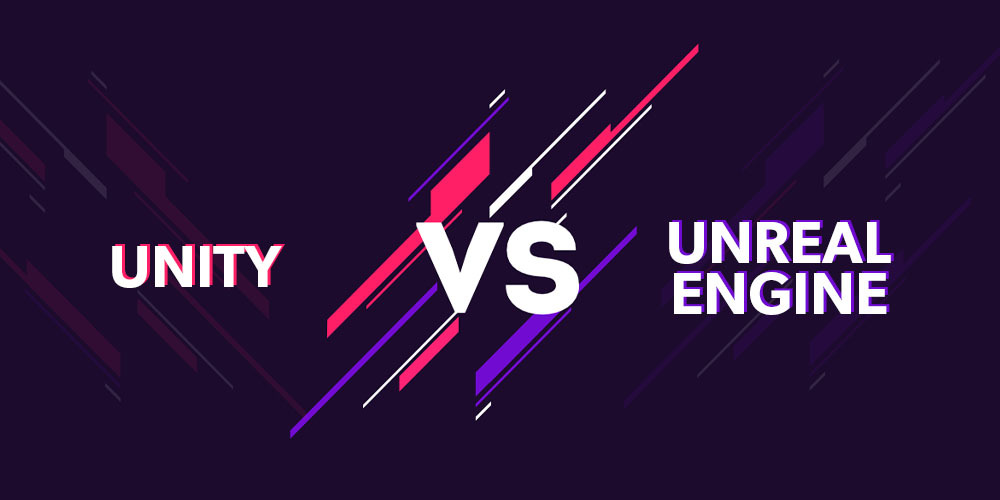 Unreal Engine Vs. Unity 3D Game Development: Which Should You Pick?

Unity 3D and Unreal Engine are the only two major players in the “Unity versus Unreal” war when discussing game engines. These engines power some of the world’s most popular games, including Fortnite (Unreal Engine) and Pokémon Go (Unity 3D).

If you are currently in the gaming industry, you may already know that Unity 3D has a 48% market share, while Unreal Engine holds a 13% share.  Thats why many entrepreneurs Choose unity for game development. However, this does not say everything. Both have distinct benefits, and your choice will depend on your needs. This leads us to the subject:

What’s Your Strategy? (selecting between unity and unreality)

Before discussing Unity vs. Unreal, it is essential to determine the type of game you intend to create. Perhaps you are attempting to create something that combines 3D and 2D. You might want to keep your first game simple but engaging, such as with word puzzles or shooter games. It may be something with a high demand for generating revenue with high-quality graphics.

Are you creating a game as a hobby, or do you intend to publish it in app stores and make it available for online and offline purchases? Before deciding on the most suitable game engine, you must consider each factor.

Once the plan is complete, it’s time to consider a few deciding factors between Unity and Unreal.

Pricing is the first factor that comes to mind. Both engines have some free and fee-based components.

If your quarterly game revenue is less than $3,000, the full version of Unreal Engine 4 is free; otherwise, 5% of your game’s gross revenue will be charged.

The Personal plan of the Unity Gaming Engine is free and adequate for individuals and small businesses. Unity offers two types of enterprise-level programs. The Plus package is available to companies with a 12-month revenue of less than $200,000 before purchase. Thats why many entrepreneurs choose unity game development company to develop games for their business motive.

Unity offers a Pro subscription to businesses with a 12-month revenue history exceeding $200,000 before purchase. The Pro subscription provides access to source code and priority customer service and support, among other features.

Aside from this, additional costs are associated with developing games for iOS and Android.

Therefore, Unity 3D development may be a good option if you are planning something substantial. However, if your plan is simple or exploratory, Unreal Engine can be a lifesaver.

To develop a game that is highly secure, scalable, and requires less code, the appropriate programming language is crucial. Unreal Engine game development 4 employs C++ for programming, whereas Unity 3D uses JavaScript or C#. It is a matter of personal preference and skill sets to determine which program is superior. The choice may be straightforward if you favor one of these programming languages over the others.

Unreal Engine 4 and the Unity 3D game engine have their respective asset stores. There you will discover ready-to-use 3D models of characters, as well as textures, environments, sounds, and even particle systems. Nevertheless, Unity 3D is superior because it has a much larger selection of assets in its store. It features animation and GUI generators, additions for artificial intelligence control, the ORK Framework for role-playing game development, and more. Because of this, it is possible to make incredible games with Unity 3D if you have access to a better asset store.

The more platform access you have, the greater your customer base will grow. Let’s examine which engines provide the best platform coverage:

The Ease To Use (Unity vs. Unreal)

Unity 3D is well-known for having an intuitive user interface, which makes it possible for inexperienced game developers to create games rapidly. Despite the numerous improvements in the most recent update, such as the statistical mobile upload function, Unreal Engine continues to lag behind Unity 3D in terms of the user experience it provides.

On both sets of interfaces, toolbars and settings are contained within windows that can be resized and moved around. The Unreal user interface is cumbersome and overly complex to navigate. In multiple respects, it is a more time-consuming endeavor than Unity 3D. The process of importing and storing assets takes a lot of time, and even relatively straightforward tasks require additional steps. Unity 3D is a speedy program, and its user interface is both quick and responsive. UE4 requires at least Windows 7 64-bit, but this program only weighs a few megabytes and works with Windows XP Service Pack 2 (SP2). It’s possible that the final product created in Unreal will look better than the one created in Unity 3D, but creating it in Unreal can be more challenging, especially for beginners.

Unreal Engine 4 features visual Blueprint scripting. It contains a node-based scripting method. Technically, it’s not necessary to write code. This is ideal for rapidly prototyping levels, and the Blueprint can even be used to create entire games. You can create games with certain restrictions if you are not a programmer.

However, this feature is unavailable in Unity 3D, which is a disadvantage.

Unreal Engine 4 is far superior to Unity 3D in terms of graphics. Complex particle simulation systems and advanced dynamic lighting are available in the Unreal Engine. Unreal Engine 4 can create any visual style in 2D or 3D. It is always beneficial to have the option to enhance the graphics if desired. However, the upcoming version 5 of Unity 3D is anticipated to be comparable to Unreal Engine.

Also read: Everything You should know about Online Ludo Game

This concludes our comparison between the Unity and Unreal engines. It is difficult to conceive of game development without these two tools. Both machines have advantages and disadvantages, so the best option will depend on the project’s requirements. In addition to its ability to create 2D and 3D simulations, Unity is renowned for its large user base and support for user performance development. In contrast, the Unreal Engine is preferred for large-scale game development due to its visually stunning capabilities. Lastly, the project solution you choose must be user-friendly. In conclusion, what is your preferred game development engine? Unreal Engine Vs. Unity 3D Game Development: Which Should You Pick?
0
Share FacebookTwitterGoogle+ReddItWhatsAppPinterestEmail

How to Write a Good Essay

Musk accuses Twitter board of ‘deliberately’ hiding evidence from court

How to Get KBC Real WhatsApp Number 2023

How Does The Balloon Tie Tool Paintings?

Xbox One X Versus Xbox One S: What’s The Distinction

Here Are The Best Adornments For Your New Playstation